The Lagos State Government, in a bid to reduce Human Immunodeficiency Virus (HIV) deaths and maternal transmission of the virus to the unborn child, has commenced the integration of HIV services into ILERA EKO Health Plan.

Presenting the HIV Test Kits to the General Manager, Lagos State Health Management Agency (LASHMA), Dr. Emmanuella Zamba, the Chief Executive of the Lagos State AIDS Control Agency (LSACA), Dr. Monsurat Adeleke, said that the integration would further ensure the achievement of the global target of HIV epidemic control by the Year 2025 and the 95-95-95 target of Joint United Nations Programme on AIDS (UNAIDS).

She commended Governor Babajide Olusola Sanwo-Olu for granting the approval to purchase the testing kits, adding that the laudable program is the first of its kind in Nigeria geared towards expanding services for HIV control.

Dr. Adeleke said that the HIV services on the Health Insurance Scheme would include Providers’ Initiated HTS, HIV Testing for the Antenatal Care (ANC) attendees, and client-initiated testing at any of the facilities, stressing that it will also help to increase coverage on mother to child transmission.

According to her, about 1.7 million children are living with HIV globally and research has also shown that in the Year 2020, 14.5 percent of AIDS-related deaths were children. She declared that LSACA would continue to develop new strategies and interventions aimed at reducing HIV in the State.

In her remarks, the General Manager, Lagos State Health Management Agency (LASHMA), Dr. Emmanuella Zamba, applauded the Lagos State Government for providing the testing kits which would be distributed to the Providers under the Ilera Eko Health plan.

She said the initiative is a result of the actuarial analysis carried out by the Agency to determine the additional benefits to be included in the Ilera Eko health plan, stressing that LASHMA will continue to provide support to the Providers in order to ensure quality, effective and efficient service delivery to enrollees.

Applauding HP PLUS, a partner of the Agency, and the USAID for deeming it fit to train LASHMA Health Providers on HIV testing kits, Dr. Zamba reiterated the Agency’s resolve to partner with individuals, organisations, philanthropists and donors towards realising its goals.

Also, the Health Financing Technical Adviser, HP PLUS, Dr. Chidumga Ohazurike, commended the Lagos State Government for integrating HIV Testing on ILERA EKO and partnering with USAID to reduce HIV in the State, noting that the laudable gesture would also ensure that Lagos State is a city of healthy and wealthy people.

Dr. Ohazurike said that USAID, through HP PLUS, trained the Health Providers on HIV Testing because quality is very important to the organisations, adding that USAID is also interested in closing the testing gap and services for women and children living with HIV in the State. 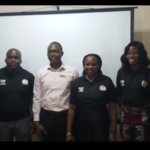